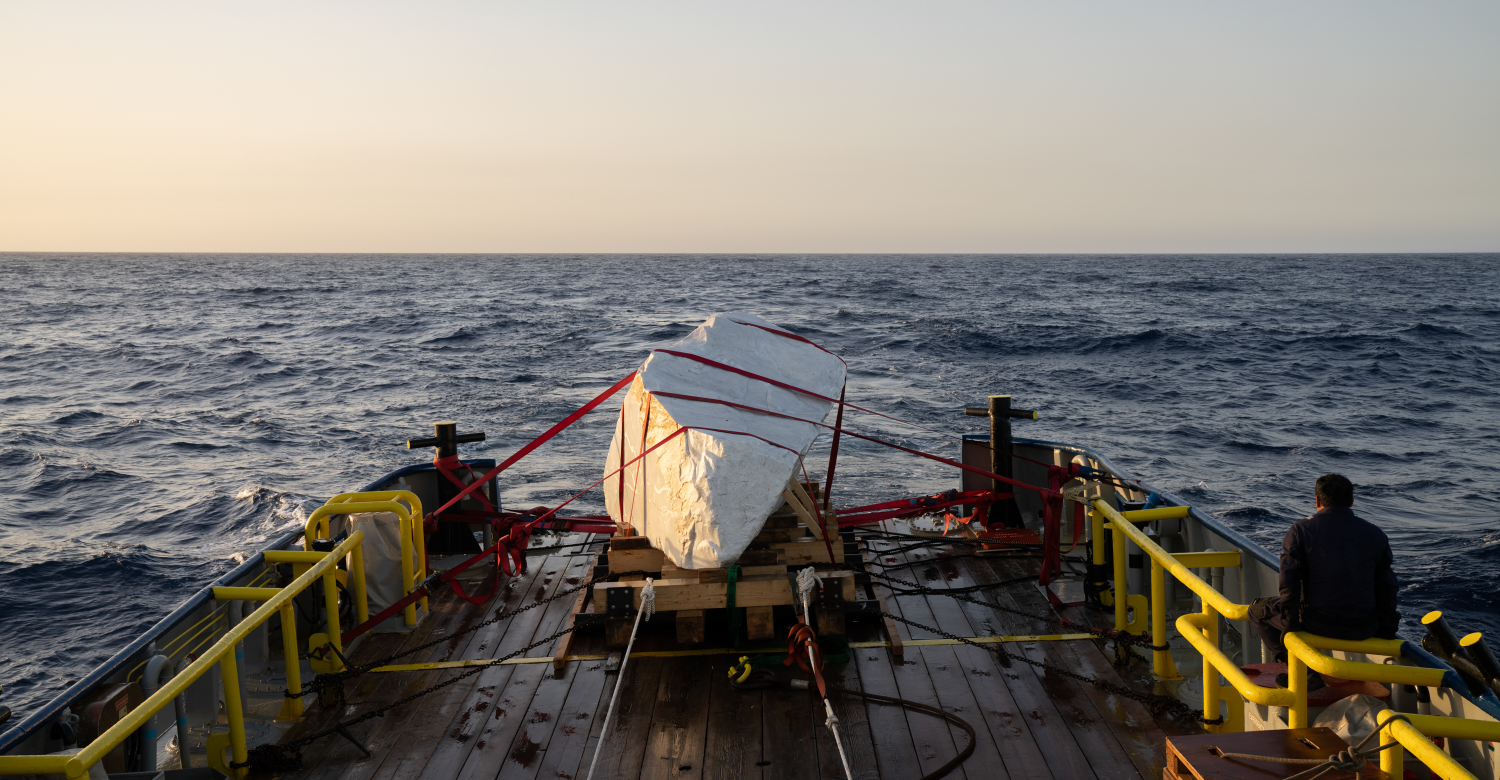 Transformations of a complex Body of Water

A conversation with the artist Rossella Biscotti

Can you tell us a little bit about the origin of the project?
The Journey was born from a prize received in 2010 at the International Biennial of Carrara. The prize consisted of a large block of marble extracted from the Michelangelo Quarry, the historic quarry of the Renaissance sculptors. At the time, I was doing research in Lampedusa, which was already the main landing point for migratory flows.

So I was often crossing the Mediterranean for my research and from there came the idea of releasing this block of marble into the centre of the sea. From this simple idea a mechanism was born to explore that area on different levels, imagining the Mediterranean as a stratification of historical, political, geographical and geological meanings. Until 2016, I composed a series of maps of the area, ranging from the division of licences between oil and gas companies to the numerous military operations, from geological maps to maps of cables, wrecks, etc., all of which I was able to do. The Journey culminated in May 2021 in the voyage of a ship from Malta across the central Mediterranean for three and a half days following a route of GPS points, resulting from the research and mapping carried out, to a point where we released the 20 ton block of marble into the sea.

How was the route defined?
He would trace paths and mapping points. For example, it started from Malta and followed some geological rift lines, the Tunisian plateau, and then followed the division lines of oil and gas licenses, reached the points of some marine wrecks, even followed the track made at sea by a turtle released by the NatureTrust in Malta, and again it moved along the Frontex line and through a series of GPS points of the distress calls received from migrant shipwrecks in the Libyan sea then following a constellation of points selected from the Alarm phone organisation's archive.

Like a great multi-voiced song of a liquid territory. Like Chatwin's songlines!
Defining the sea as a public space. Who defined this space, who operates it?

And what was the ship like?
The crew was Filipino, the Mediterranean is crossed by everyone! And travelling with them brought that culture into this project. For example, in terms of sound, I recorded some of the songs in Tagalog, from their karaoke repertoire.

And so you trace out that hybrid Mediterranean on the move, irreducible to any static identity... even that of the states that border it! And what happened after the marble was cast?
The marble is a bit of an excuse to analyse this area. The idea now is to work mainly on sound, so that this ship becomes a kind of ear that listens to what is happening, both under the sea and on the surface, pouring out the perspective and listening to the land from the sea. We also did a series of research in Tunisia, for example on the islands of Kerkennah where we explored the point of view of the fishermen, because this is the only place where the fishermen own a part of the sea. And where we will carry out a series of interviews with activists about the particular ecosystem of these islands and the responsibility for a progressive climate disaster due to mining, for example by the British company Petrofac. We will also record fishermen's songs typical of this area and of the Gulf of Gabes, thus focusing on the ecological and musical component.

And next year The Journey will be presented in Tunis for Between Land and Sea!

The Journey is a performance of a ship navigating a GPS content-related route inspired by time, history and current geopolitical data in an area between Italy, Malta, Tunisia, Libya. The narrative is centred on the decision and consequences of dropping a 20-ton marble block awarded to the artist by the iconic Michelangelo quarry in Carrara, Italy, yet left untouched. Rossella Biscotti uses the block as a mechanism to unpack the political, economic and environmental layers of a complex body of water.

E l’anno prossimo The Journey verrà presentato a Tunisi per Between Land and Sea!